For 2,000 years, Catholics and the Church have been a force for good in society. Since the Gospel, Catholic Christians have worked to help the poor, feed the hungry, care for their neighbour and proclaim the good news. Today, you are invited to continue spreading Christ’s ministry.

By becoming an Ambassador of the Catholic Archdiocese of Sydney, your regular gift (fortnightly) will support the Charitable Works Fund, the Priests’ Retirement Foundation, the St Mary’s Cathedral National Trust and/or the Palestrina Foundation. 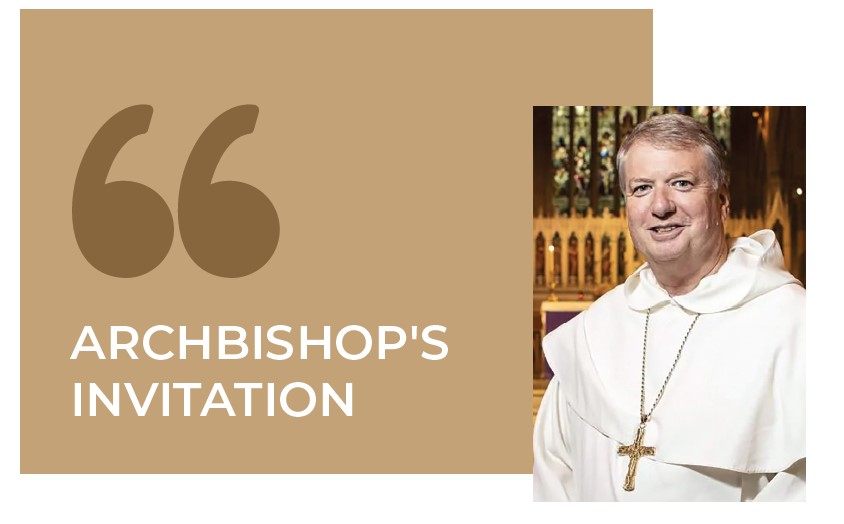 At a time when the Church is routinely portrayed as being irrelevant and unwelcoming, Christianity has in fact been the glue for what we call modern Australia and has always been open to sharing its treasures with everyone.

Older members may recall a scene from Monty Python’s ‘Life of Brian’, in which John Cleese plays Reg, a member of the People's Liberation Front of Judea. He asks, “What have the Romans ever done for us?”

To his frustration, his fellows respond to his rhetorical question, and they respond with example after example of the benefits of Roman civilisation.

“Alright, alright.” Reg concedes, “But apart from the sanitation, the medicine, education, wine, public order, irrigation, roads, a freshwater system, and public health, what have the Romans ever done for us?”

Something similar might be said about the indebtedness Australian civilisation might have to another type of Roman, the Roman Catholic.

“Alright, alright. But apart from the sanity that sanctity brings to a world of sin; or the invention and maintenance of hospitals, hospices, and leprosaria; or the invention of the university and provision of the most comprehensive primary, secondary and tertiary school system in the world; or the endowment and staffing of orphanages, aged care facilities, feeding for the indigent and other welfare services; or the many supports for marriage, family and local neighbourhood; or the ending of human sacrifice, cannibalism, slavery, infanticide, and a chattel conception of women and children; or the explication of a sublime moral code and vision of the virtuous person that still inspires so many; or the promotion of literacy, libraries and printing; or the advent of the scientific method, and much subsequence science, medicine, and technology; or the heritage of Christian art, music, literature, and architecture including our great Cathedral; or the corpus of Western theological and philosophical thoughts that provided the metaphysical grounding for our politics and so much else, what has the Roman Catholic done for us?”

Catholics have made a great contribution to society, and we have a good story to share.

For 2000 years, Catholics have pioneered in faith, society and culture; instilled charity and self-giving love into communities; and have led in caring for the poor, sick and elderly. Today we continue this work through the many charitable works of the Church, including the Charitable Works Fund, the Priests’ Retirement Foundation, the St Mary’s National Trust and the Palestrina Foundation.

We invite you to continue this ministry today.

Please consider becoming an Ambassador of the Catholic Archdiocese of Sydney, and provide a regular gift to further our ministries.

Whether your regular gift is $5 or $50, every donation will help advance our faith and our works in Sydney, and beyond.

BECOME AN AMBASSADOR OF THE ARCHDIOCESE TODAY

A fortnightly gift of $25 could provide: